This proposal is to forge the start of a multilevel partnership between Rage Trade and Sperax. The Rage team proposes seeding USDC from SperaxUSD collateral, to earn yield by staking USDC into Rage’s Delta Neutral Vaults to earn yield. If the proposal passes, collateral will be deployed following a successful 8 week monitoring of vault performance.

Seeding USDC collateral in Rage Trade’s vaults will not only allow diversification, but it will also pave the way for future synergies such as creating more use-cases for USDs within DeFi.

Rage Trade’s Delta Neutral Vaults are a set of contracts that allow users to pool in funds for providing liquidity on GMX in a delta neutral way while earning ETH rewards on GMX. This vault operates on-chain for minimising exposure on ETH and BTC by performing a short on Aave + Uniswap with the help of two separate risk vaults.

What are the Vaults?

Risk-Off Vault: Allows users to deposit USDC that can serve as collateral on Aave, while earning the Aave Supply APR as well as a portion of ETH Rewards from GMX based on the utilisation ratio.

Risk-On Vault: Earns yield on GLP while neutralising ETH & BTC price exposure. Since proportions of ETH and BTC can change on GMX, the vault updates the open short on every rebalance.

By staking USDC in either vault, Sperax can be paid out in real yield by our USDC denominated delta neutral vaults. Our vaults will have a $5M smart contract insurance policy live on day 1 which has been paid for completely by the Rage Trade team.

Rage Trade also proposes to open a $RAGE/USDs Demeter Farm once the $RAGE token launches on mainnet in Q1 2023.

Rage Trade is an ETH perpetual platform that facilitates perps and perpetual products on Arbitrum. Rage Trade’s two-vault system allows for users to take advantage of delta neutral positions in the GMX ecosystem according to their risk appetite. Rage Trade’s vaults are also great avenues for stablecoin protocols to deploy some of their USDC backing and earn real yield. Depositing into Rage Trade’s vaults would not only be a great opportunity for Sperax to take advantage of a high-yielding delta neutral stablecoin farm, but also an opportunity to develop a long-lasting relationship between both protocols, as well as the introduction of a new Demeter farm incentivized by RAGE tokens.

A Strategic partnership would benefit both parties;

1. How does the strategy work?

Rage’s Delta Neutral Vaults turn GMX’s GLP into a stablecoin farm by hedging the ETH & BTC exposure. This is done by catering to two types of users: the risk-on users and the risk-off users.

The Risk-Off Vault has no liquidation risk or GMX risk and earns interest from lending USDC on Aave. It also earns a fraction of ETH rewards from GLP based on the amount of USDC lent to the Risk-On Vault.

2. What are the fees involved?

3. What is the expected APY?

4. Most importantly, what are the risks involved in investing in this strategy for the SPA community?

5. How exactly does the strategy maintain delta neutrality? What is the hedging mechanism?

The risk-on vault updates its hedge position every 12 hours or if one of two things occur— if there is a price change in ETH or BTC of more than 5% or if the health factor on AAVE goes below 1.2.

6. Is any component of the hedging mechanism off-chain?

Rage’s hedging strategy is fully on-chain and uses Aave, Balancer & Uniswap to create the hedges. For triggering rebalances, we run keepers bots that can be permisionlessly run by anyone in the community.

Risk Management: Rage Trade vaults do not enforce any deposit or withdrawal fees (besides slippage costs), as well as any lock-up periods.

Yes: Deploy 10% of the USDC collateral held in Sperax USD collateral vault into Rage Trade’s Risk-Off vault to earn yield. Collateral will be deployed only after a successful 8 week monitoring of vault performance.

No: Reject the proposal.

“Our vaults will have a $5M smart contract insurance policy live on day 1 which has been paid for completely by the Rage Trade team.”

What does it mean? Please explain it easily.

I think this is a great collateral strategy in a growing and well put together protocol. I like the risk/reward.

Thanks for the question,

I hope this answers your question!

so good come on do it

Not sure what I’m more excited by…

There is a significant amount of misinformation in this proposal that needs to be addressed. Lets go over it in points, one by one.

“A Strategic partnership would benefit both parties;

These proposed benefits to Sperax demonstrates an egregious amount of hubris. Foremost, Rage Trade is not the largest perpetual protocol on Arbitrum, GMX is. Rage Trade is giving GMX exposure for the use of our liquidity and risk.

In fact, the RT vaults have not even launched so there is no long term data what-so-ever to support this statement. Currently, there are 6 vault products building on GLP for delta neutral/delta minimized strategies. NONE of them except RT claim to have the “highest yielding” vault because only one, GMD, has even launched yet.

Likewise, the vault is NOT “no fees” as claimed by the OP. The RT documents clearly outline that a 10% fee on ETH revenue is paid to the protocol (sauce: Operations - Rage Trade). ironically, the above post from Sir Viperr indicates a 15% fee is being requested for the RT protocol which is above what their own documents have published.

Lastly, although Sir Viperr has noted that the vault has a $5m smart contract insurance policy by Sherlock, however, this policy DOES NOT protect the vault depositors from losses accrued due to the strategy itself. Furthermore, Sherlock was ilicitly using their insurance pool collateral fund to farm Maple Finance’s uncollateralized Pool 11 LP which resulted in a loss of $4m out of $5m on the LP. This means that the protocol is not able to fully collateralize insurance policies and thus the policy would not be able to pay out in the event of multiple losses. (https://twitter.com/sherlockdefi/status/1600576286266638356?s=20&t=3dXuhkMQt4A-twNwm2WOlw)

The Rage Trade data is not well backtested or modeled. RT advertises their vault to be “delta neutral,” but in fact, modeling data over the past year was cherry picked for the past few months and DOES NOT account for severe volatility or tail risk. In fact, the Rage Trade documentation only shows modeling for the past 9 months without demonstrating vault performance during an “up only” period like October 2021 (please see the redacted modeling that was published on their CT). Notably, the team conveniently deleted this modeling graphic from their documentation after posting it early on. 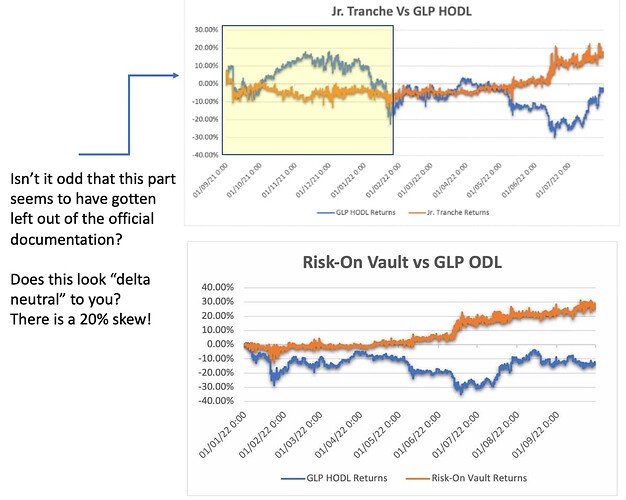 If evaluated broadly, over the scope of the past year, their own data demonstrates up to a 30% skew in returns over the modeling period. This is NOT a delta neutral strategy. Most of the time it is not even delta minimized.

Recently, in the news we have learned of protocols (ahem Sherlock…the proposed insurance provider) that were trying to do high risk yield farming in uncollateralized pools like Clearpool, Maple and TrueFi. Those protocol users got rekt and lost money. Do we really want Sperax users to be in the same boat?

This proposal needs revision and reconsideration. As members of the Sperax community, we have a duty to protect our protocol funds from risk.

Is a potential loss of SPERAX funds something that we, as a community, are willing to risk on an untested, unproven strategy in a bear market where EVERY dollar counts? I would STRONGLY urge the community to shelve this proposal for a minimum of 3 months to observe real world vault performance before any funding commitment is made.

Great strategy, think 10% is a good first step, and if after 3 months it shows to be a good partnership, would be great to increase it to say 30-40%

Very much appreciate the thought put in to this post! I think there are some valid points here related to the risk/reward that need to be considered by the community before voting.

Agree on a few of the aspects mentioned by @SilenceDogood At Sperax we are ourselves working on a risk management smart contract framework which will absorb most of the risks from these kinds of trading strategies.

@Viperr Could you please kindly modify the proposal and remove some of the claims.

The risk profile on this is too large for Sperax IMHO
We want to guarantee USDs stability/backing, indirect exposure to GMX pools kinda makes that impossible to guarantee.

Hey, I am the founder of Rage (https://twitter.com/crypto_noodles). I just want to address some of the concerns brought up:

Integration with the largest perpetual protocol on Arbitrum

Since our vaults aren’t in production yet, all of our data is based on backtests. Based on our backtests, our vaults would be the highest yielding delta neutral vaults on arbitrum (not including additional token emissions).

We haven’t cherrypicked data at all, we backtested using data from the inception of GMX to present day. I have also tweeted GLP returns data as recent as end of November: https://twitter.com/crypto_noodles/status/1597266619201642498

Yep I think this was phrased incorrectly, it was meant to say ‘no management fees’. We do take a performance fee that is stated in our docs too. Unlike other delta neutral vaults, we dont take management fees or force capital lockups.

Are we really delta neutral?

We have two vault products a Risk-On Vault + Risk-Off Vault. Both are delta neutral, but the risk on vault is exposed to trader PnL on GMX while the risk off vault is not.

Target APYs (based on backtests):

The claim that we aren’t delta neutral because the backtests shows a drawdown, is not correct. The risk on vault is only hedging the ETH/BTC exposure of GLP, not the trader PnL. So that means if traders start to win on GMX, then it impacts depositors in the Risk On Vault.

On the other hand, Risk Off Vault experiences no drawdowns throughout its existence because it is a fully over-collateralized loan position. For a stablecoin like USDS, depositing in the Risk-Off vault is a better choice than taking on trader PnL risk in the Risk-On Vault. This is a discussion that came up in our 1 on 1 discussion with the Sperax team!

I don’t think we should have more than 10% in any single strategy. Unfortunately, there aren’t quite enough opportunities right now on Arbitrum that provide a safe(ish) yield with only stablecoins. But in a perfect world, an exploit of one of Sperax’s strategies would only cause a ~10% depeg. If Sperax was doing ~40% in Rage, I would rather just hold 40% less USDs and directly invest in Rage myself. The usefulness (in my mind) is the auto-diversification function.

We just made some updates to our proposal after reading the feedback we have received below. Most importantly, we have updated the vote as follows:

Yes: Deploy 10% of the USDC collateral held in Sperax USD collateral vault into Rage Trade’s Risk-Off vault to earn yield. Collateral will be deployed only after a successful 8 week monitoring of vault performance.

No: Reject the proposal.

We thank you for your feedback and hope we can get your support in passing this proposal!

I support this proposal

I support this proposal