We extend this proposal to Sperax in order to align our two communities on common ground: stable, transparent yield.

Jones proposes that Sperax become a launch partner for our jGLP/jUSDC Gamma Neutral Vault. This would require depositing USDC into the jUSDC side of the vaults, earning the Sperax treasury composable, transparent, stable yield and setting up an environment to flush USDs with liquidity.

If this proposal is passed, the USDs token will bolt on one of its highest yielding, lowest risk, yield generating partners, which we will show throughout this proposal. This proposal will bring USDs closer to becoming the native DeFi yield layer, Sperax will be able to create more USDs over time based on the strength of jUSDC and its yield. By becoming an official partner, we will continue to seek to improve Sperax’s position in the Arbitrum ecosystem, and present the community with every opportunity to do so.

GLP is currently the most lucrative and scalable yield in DeFi, with over $400m in TVL earning consistent yield from trading fees on GMX. Built on GLP, jGLP and jUSDC are two distinct and efficient products for both risk-on and risk-off users respectively.

It’s important to note - the leveraging & deleveraging of jGLP is what will keep collateral ratios and the principal jUSDC stable. This unique architecture results in yield, efficiency, and safety far greater than other GLP-based products.

Superior architecture to GLP hedging models: no exposure to GLP volatility, No risk of being outsmarted by GMX traders, no constant hedging costs.

Since jGLP leverages GLP’s already high yields, Jones is able to create a much higher base from which to reward jUSDC depositors than our competition. This means: even during periods of yield compression, jUSDC depositors will be rewarded through our vault incentives - including non-GLP related products.

As a USDC Stablecoin Vault, jUSDC accrues all of its yield in USDC.

The new standard for risk-on yield generation: Maintains exposure similar to ETH or BTC while earning leveraged multiples of the base GLP yield.

Jones believes that Sperax has been seeking a product with this type of yield and risk profile for some time. Therefore, we feel that the Sperax community would be interested in participating in this vault:

Following a successful 8 week monitoring of vault performance, as observed in previous proposals, we request that the Sperax Treasury allocate the maximum USD amount of tokens available, pending approval by the Sperax community.

This will bring some of the best risk-off yield in DeFi to the Sperax Treasury.

jUSDC lends to jGLP with enforced lending parameters to ensure debt is sufficiently collateralised at all times. jUSDC is unaffected by normal price changes and PNL within GLP. As a stablecoin yield vault, jUSDC is principal protected.

jGLP rebalances automatically to target sufficient collateral. Keepers that manage this rebalancing process ensure jGLP is liquidation proof. jGLP incurs PNL based on price changes and trader PNL within GLP – through this, it behaves similarly to holding a basket of ETH & BTC. 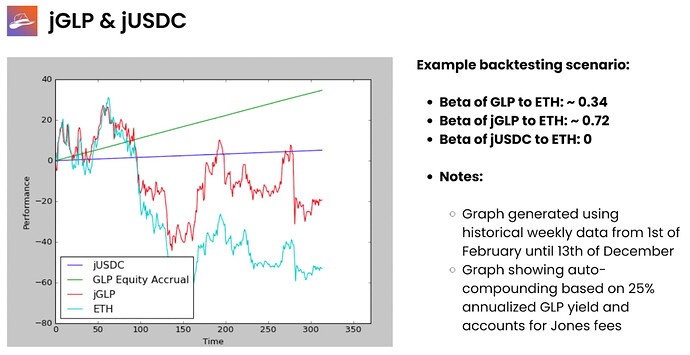 Disclaimer - These figures are not a guarantee of future performance.

Many current and upcoming delta-neutral GLP vaults attempt to create stablecoin yield by hedging exposure, and by doing so introduce often overlooked risks. In a hedged GLP position, the user is short gamma as changes in delta produce mismatch between hedges and exposure. This basis risk often leads to losses, not to mention the cost of carry skyrockets from frequent rebalances and variable rates on hedges.

The jUSDC Vault goes beyond delta neutral, to gamma neutral. Because jUSDC earns yield from lending to jGLP, it effectively remains delta-gamma neutral. jUSDC generates stablecoin yield without the need for inefficient hedges and hidden risks.

GLP’s target ratio is half stablecoins, half non-stablecoins (BTC, ETH, and alts) although in practice these ratios change constantly. By leveraging up GLP >2x, the delta is increased i.e. the position value changes more as the price of constituent assets changes. Then, the beta produced is closer to ETH or BTC, meaning that jGLP behaves in tandem with the broader market.

Leveraging to increase delta within GLP creates jGLP, an asset that behaves similar to the broader market while earning leveraged GLP yield.

Deploy the maximum USD amount of treasury tokens available into the jUSDC vault after an 8 week performance monitoring period.

Nach from JonesDAO here - happy to discuss or answer any questions you might have and we would LOVE a community AMA if the Sperax team has time for it!

@nach211 How does depositing USDC into jUSDC work? Is there a lockup period for deposits? Is there any fee involved? What is the process for withdrawing collateral from the jUSDC vaults? What is the hedging strategy? What is the exact nature of the risk jUSDC vault takes to generate yield?

Can you please share functions that are called to deposit USDC into the vault. Also all the relevant contract addresses.

How could the withdrawals work in case of Sperax protocol? Sperax USD is 1:1 redeemable for all time periods.

The answer to the fee component is not clear. Will the Sperax protocol need to pay a fee of 0.97% when withdrawing assets from the vault? For example if Sperax protocol withdraws 100 USDC will it receive 100*(1-0.97%) USDC.

Another question, are all your contracts verified? If yes, then please share the arbiscan links of the contract.

Our USDC vault has not been launched yet, it will be deployed later this January.
All contracts will be verified.
USDC deposits will always be redeemable 1:1 with a 24h cooldown time from withdrawal request.
The withdrawal fee is 0.97% (of which 0.97%-GLPBurnFee gets distributed to the rest of the USDC depositors as retention APY).

We have a built in whitelist functionality to bypass both cooldown and fee in case of special agreements with partners.

Currently all emergency functions do not have timelock and are controlled by a 3/5 gnosis safe.

Thanks for your response @ultra.
Understood. So the fee is 0.97% for withdrawal.

Our whitepaper is out if you’d like to take a look. @subh

Would also love to review the smart contracts if they are live on other chains/testnet. Please share the details with us once live. Thanks.

@nach211 I think we should wait till the contracts are live on Arbitrum before we take this to a snapshot poll. That way the Sperax engineering team and the community will have enough time to assess.

Thanks for a detailed proposal!

There needs some clarity on “max amount of USD”. It’s not reasonable to swap all collateral for USDC then allocate all collateral to this vault. We need asset and strategy diversification.

In the next few days we will be able to provide a link to an audit report and the smart contracts will go live on January 24th.

Yeah, I also think we don’t have to hurry with this decision, at the moment I feel like it should be “no, let’s make more research”
Collateral for USDs is valuable thing, having a lot of strategies involved is generally great, it reduces risk, it connect us with other communities, it gives yield from different sources, but in this case I feel like this sip it is not yet good move.

Thanks for the feedback AlecShaw! We wanted to let the community decide what the right number should be so we figured we would have a robust discussion here and take the temperature!

Thanks for the feedback Matej221! One thing I’d love to do is set up a community call with Sperax so we can have a hearty discussion about our backtesting, monte carlo analysis and also questions the community has too!